A stunning bride and dashing groom were married last weekend in true luxury. Flowers literally dripping throughout the ceremony and reception with no expense spared. A detail orientated bridezilla (by her own admission) emerged as the wedding date drew near.

Following their engagement last Christmas after just 6 months of dating, with a 7 carat rock perched upon her finger, the loved up pair set upon creating the day of their dreams. They enlisted the elite in the wedding industry to help them bring it all together including floral designer extraordinaire, and rockstar in the floral world, Jeff Leatham. These are the kinds of jobs as a florist that test your ability, your creativity, your ingenuity and your ability to truly understand the vision inside your clients head and bring it to fruition but Leatham seems to be able to do it with his eyes shut. And we can only assume from the couples shout outs to Jeff online, that they were thrilled with the results.

Sophia Vergara married Joe Manganiello in a lavish ceremony At the Breakers Palm Beach Hotel, Florida, surrounded by some 400 guests, many of whom were celebrities of course.

Sophia was a vision in a gorgeous custom Zuhair Murad Couture design gown, reportedly adorned with 6 pounds of pearls and 11 pounds of sequins! Sheesh!  It was only one of three white gowns the beautiful bride-to-be wore over the weekend of wedding fun; including performances by Pitbull, pre-wedding cocktail parties, post wedding hangover brunches, Magic Mike striptease and more!

Floral designer Jeff Leatham and his team created a gorgeous orchid bouquet for the bride, and adorned the inside ceremony in The Mediterranean Ballroom, with white roses, hydrangea and orchid blooms, literally dripping from the ceilings. Sophia’s son Manolo, walked his mother down the flower lined aisle, to her waiting hunk of a spunk  to begin the ceremony which was performed in both English and Spanish.

In a stark contrast to the ceremony, the reception in the Venetian Ballroom was a rich and romantic mix of reds and pinks; a wild jungle of roses and orchids, stunning and opulent, a style that has become synonymous with Jeff Leatham. He has been awarded the prestigious  “Chevalier de L’Order des Arts et Letters”, in 2014 – The French Governments Highest Honor for Artists whom have made a significant contribution to French culture, and often his floral installations are compared to contemporary art. His style is a unique combination of his love for flowers as well as his passion for overall design. His pieces are bold statements, not merely backdrops, that focus on shape, colour and simplicity to produce a dramatic effect.

Formerly a successful male model on TV and on the runway, after leaving the world of fashion, Leatham turned to the floral world. Beginning at the Four Seasons Hotel Beverley Hills in 1994 as an assistant to the floral designer, Jeff made it clear he was extraordinary and was then made artistic director of the Four Seasons Hotel George V in Paris in 1999 when the hotel was still under construction. Every 3 weeks Leatham creates a entirely new concept to “knock people over” when they enter the hotel, not simply adorning the concierge desk with a vase but rather creating masterpieces that carry right through the hotels public areas and into 80% of the guest rooms. The hotel very quickly became known as the ‘flower hotel’ and is on the to-do list for many visitors to Paris.

Leatham also presents seminars to us mere motals, where we can gain insight and inspiration from his work with celebrities and for luxury brnads. Leatham has written 3 books: “FLOWERS BY JEFF LEATHAM”, “FLOWERS BY DESIGN” and  “Jeff Leatham – Visionary Floral art and Design”.

Now, I’m sure it goes without saying that this wasn’t Leatham’s first rodeo. He has a regular list of celebrity clients, and had the honour of creating the florals for the Wedding of Marc Mezvinsky to Chelsea Clinton, daughter of President Bill Clinton and Secretary of State Hillary Rodham Clinton, as well as Eva Longoria, Avril Lavigne and Tina Turner. He has also serviced the floral needs of Oprah Winfrey, Madonna, Kylie Minogue, The Kardashians and Celine Dion and His Holiness the Dalai Lama and has appeared on Martha Stewart, Queen Latifah and Oprah’s show. Talk about an impressive resume!

Despite his success, Leatham hasn’t forgotten his roots and is loyal to the Four Seasons:  “Whether at the George V or outside the Hotel, everything I do is on a Four Seasons level,” he says, adding, “I’ve had an amazing career and I own it all to Four Seasons. I’ll be here until the end.”

I certainly am inspired by the sheer volume, quality and intricacies of his works. Check out the gallery below, all posted by the beautiful bride herself on her Instagram page @sophiavergara.

You have a look for yourself and see what you think, 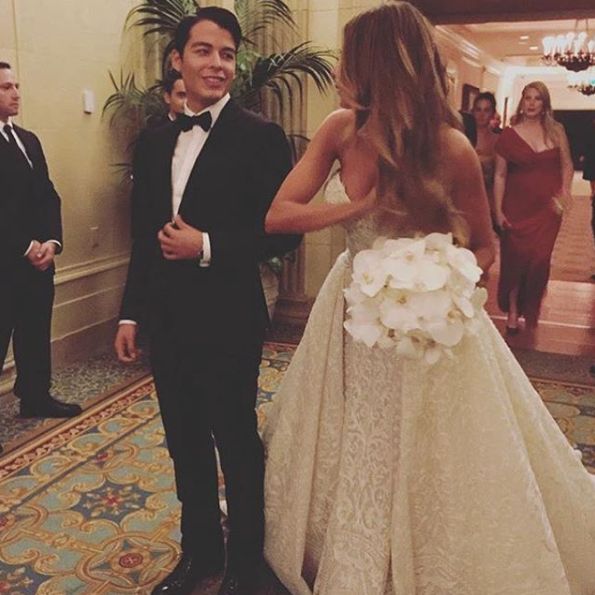 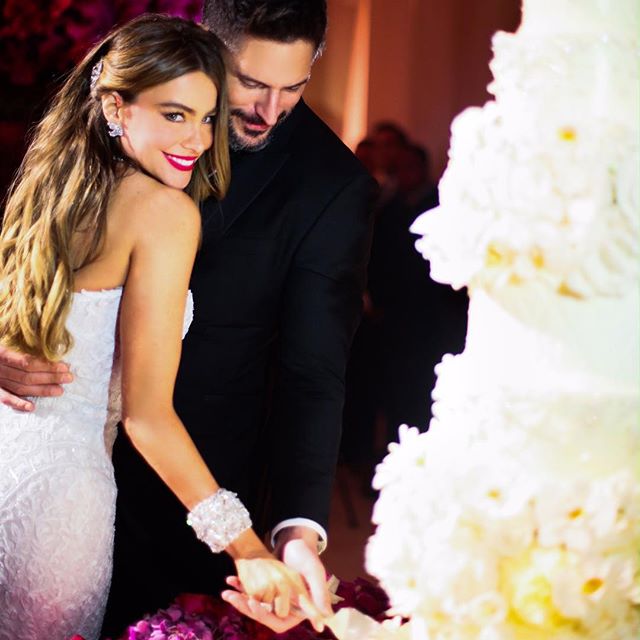 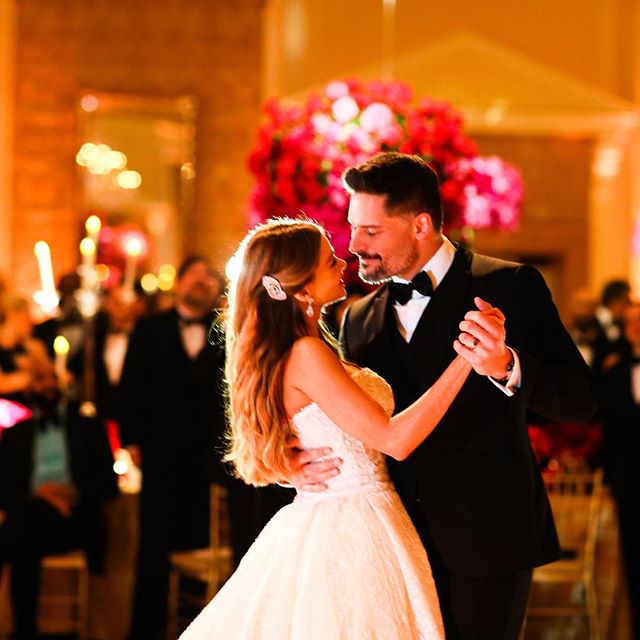